I was lucky enough to have Kat stop by and give her thoughts on DNA and why she chose that to write about!

Look What You Can Do With DNA
by Kat Duncan

Genetic topics have been brought out in literature, movies, TV and gaming ever since the structure of DNA was confirmed in the 1950s. Knowing how genes work helped us understand how close the connection is between humans and other living things on Earth.

Genetics can be used in forensics to identify criminals and clear those who have been wrongly accused. DNA forensics just keeps getting better and better. People who were convicted 15 years ago can be re-tried or released due to advances in DNA forensics that make it possible to identify the true criminal from the tiniest fragment of DNA still lingering on evidence locked away in storage. This type of identification can also be used to identify corpses when other forms of identification fail. Crime doesn't pay when your own genes give you away.

Gene sequences are being systematically mapped and documented. This means that we could take DNA from a mummy and map its exact place in history and its exact relationship with every other mummy. Because DNA mutates (changes slightly) as we age, and because these mutations are passed on to children, the DNA in each person contains historical markers that can be used to link individuals who have no other known common ancestry. Wanna look up your true ancestors and not just the ones grandpa told you about? Have a DNA genealogy test that's as easy as swabbing the inside of your cheek with a Q-tip. For only a few hundred dollars you can match yourself with the growing numbers of people who've put their DNA sequences into gene databases. You might be shocked at the results.

Genes can also be manipulated and engineered in laboratories to produce combinations of DNA that never existed before and may never have come about naturally. Because the true job of DNA is to produce proteins (and it's these proteins that give you your unique genetic characteristics) scientists can produce proteins that never existed before. Some jobs of proteins in the body are protecting you against infections, helping to digest and store your food, and producing such interesting features such as hair, feathers, and beaks. A genetically-engineered way to protect against infections sounds great along with a huge number of ways to cure terrible diseases simply by replacing faulty genes. But what about a gene therapy that allows you to grow a few feathers over your ears as a fashion statement? Are you comfortable with that?

All this knowledge about genes is useful, but it is also frightening because once we learned how DNA worked, it became obvious how we could manipulate it. Genetic mutants and freaks have always been around us, but does knowing how and why they exist make us any more comfortable with them? Quite the opposite. This new knowledge only seems to be contributing to our fears of what could go wrong, as well as what is right and wrong for us to do with this knowledge.

I didn't start out to write a novel that would play on people's fears of genes, nor did I write this book to help people understand the complicated methods of genetics research. I had one of those "what if" moments when I thought about all the as yet unidentified genes in DNA and what knowledge they might hold. Scientists speculate that a huge number of genes that are now inactive were at one time actively being used. I wondered what they were used for and whether unlocking them would reconnect us with our ancestors and their memories.

In fiction an author can present possibilities that help readers to understand complex topics. By providing a specific situation and a character who has to make decisions, an author can explore the right and wrong of a topic such as DNA technology. Synapse explores some interesting possibilities for our own DNA to help us understand who we truly are. It also shows us that no matter what we learn about the past, it is our own choices right now that create our future.


Stalked by a killer bent on stealing her laboratory notebook, scientist Molly Augur is desperate to figure out who she can and cannot trust. With the help of co-researcher Bill Banely, she uses DNA technology she invented to prove she can release hidden ancestral memories. In the brain synapses of her mind she finds one person who may know the truth - her long dead ancestor, Mailsi, whose life memories have been recorded in the depths of Molly’s genes.

Ancient passions and betrayals come alive and collide with the present when Molly discovers philanthropist Dr. Philman, with a secret billion dollar need for the technology only she possesses could be the one after her notebook. And Bill, whose wandering heart she has finally won, is working for Philman. In the face of limitless money, what is the value of Bill’s love? Or the value of her life? The answers lie deep within the synapses of her mind.

My Take:
I love finding new voices (to me) in the wilderness..that actually have something to say and say it well! Kat kept the suspense up from the first explosion to the end of the book. This is another author who has researched this and made it less complicated for those that don't quite get the whole DNA technology. And of course she didn't do so bad with the love story either. I did find Molly a bit gullible, but she was a totally focused scientist that she never thought so much outside the box until it was pretty much thrust in her face. (so I forgive the naivete) This is also some great mind food...it'll make you think (as if Dolly the sheep hasn't already made you think) about where science is going. The book kept me in the present, in the past and sometimes in the future and I had to keep the pages flipping!

Recommendation:
This book does have adult content...so be aware of that before reading, but anyone who is looking for something more scientific but with lots of suspense and some time travel built in would love this book.  (I skimmed the adult parts, but it wasn't extremely graphic if you wondering) 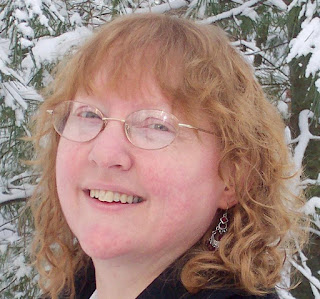 Kat Duncan is a creation extremist who is doing her best to identify human creativity and free it from captivity, one student at a time. As a young child, Kat once tried to confess the telling of her stories to her parish priest because she thought they fit the definition the nuns gave for telling a lie. With her lies fully sanctioned and blessed by church authorities, Kat has been telling her lies ever since and writing stories to entertain and enlighten. After a successful career as a software engineer, Kat decided she needed something different to do. She's now a tutor of adolescents with special needs.

The Giveaway!
Kat will be awarding gift basket worth over $15 of Irish items to one randomly drawn commenter (US/Canada only please) and a $10 Amazon GC to the blog host with the most comments (excluding the host's and Kat's).

Sooo...please comment to get your chance to win some great items (and maybe net me a prize too..:) ) The more you comment the better your chance of winning and if  you want more chance to win...please visit the other blogs!  Dates and blog names are located at Goddess Fish Promotions.