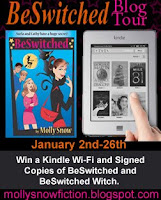 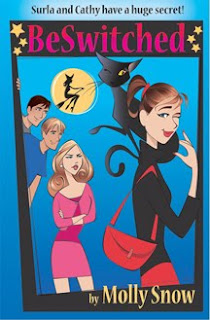 
About the Book:
After spending hundreds of years under the boot-heel of Idis, a frenzied witch, Surla (a magical black cat) decides to run away to find freedom, but there's one catch-- The Black Cats' Rule states it will switch bodies with a lonesome soul.

Cathy, an extremely shy teenage girl, can't muster the guts to ask her crush on a date or stand up to the three biggest snobs at school. What's a girl to do? Could being BeSwitched be the answer to her wishes?

My Take:
Darn those awkward teenage years. Where was the nearest witch's cat when I needed one?  This is a very fun look into learning to like your differences and trusting friendships and looking deeper into a person to determine if they are worth being a friend.   But most of all, it was just a really cute book!  I enjoyed it from page one and it's pretty short so it flew by and made for an enjoyable afternoon.  I really don't know how Molly managed to pack so much into 120 pages and still have some awesome character development and a plot that just moved you to turn the pages!   Granted the minor characters were not as fleshed out, but I didn't feel like I was missing anything.  The life lessons that were learned during the switch were told in a way that the younger reader will be able to understand exactly what is meant without having to try and decipher.   I am so happy there is a sequel...although I also appreciate the fact that I could also just take the ending as The End and not be left on a cliff....just waiting around for the next installment.  Very well done!


Recommendation:
I'd have to say...If you are in the mood for a light hearted read get it now.  Even though it is for the 13-18 year old crowd (I'd almost go younger except for one scene..)  anyone can find great enjoyment in picking this up.  I know I did.

About the Author:
She's an author who is into teen fiction, food, Hanson and food and maybe not in that order.  She just recently finished the second book of this series and loves to watch the Disney Chanel, along with getting into publishing and book touring with Breezy Reads!


Now for some great information from Molly Snow.  She is not only giving away a copy of each of her books but also a Kindle Touch!
Interested yet?  Go to Molly's Blog and find out how to get in this awesome giveaway!  You can enter by hitting the link above or the picture at the top of the post!