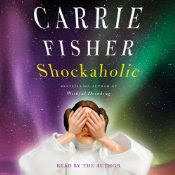 
Infused with Carrie Fisher’s trademark incisive wit and perfectly poised on the heels of Wishful Drinking's instant New York Times best-selling success, Shockaholic takes listeners on another rollicking ride into her crazy life.
Told with the same intimate style, brutal honesty, and uproarious wisdom that placed Wishful Drinking on the New York Times best-seller list for months, Shockaholic is the juicy account of Carrie Fisher’s life, focusing more on the Star Wars years and dishing about the various Hollywood relationships she’s formed since she was chosen to play Princess Leia at only 19 years old. Fisher delves into the gritty details that made the movie - and herself - such a phenomenal success, admitting, "It isn’t all sweetness and light sabers."

My Take:
This book all stems from the fact that due to her approval and success of elector convulsive therapy (shock treatment in layman terms), Ms. Fisher is starting to lose her memory and wanted to get things down in print (or in voice) before she forgets them.  I wasn't expecting such brutal honesty as I got from listening to Shockaholic.  From her relationships with various superstars of our times to what happens during a shock treatment to her own addiction to drugs to well..whatever else she felt led to share!  It's an open monologue that isn't always politically correct and sometimes just pure raw emotion.   It is a hodgepodge of topics that seemed to be thrown together haphazardly that is sometimes hard to follow.  But..for some reason, it's hard to not keep listening.  I enjoyed listening to her read about herself....kind of made the book more personal to me.
I found my daily commute to work flew by fairly quickly listening to Carrie Fisher..her voice is more down to earth than many other narrators.  I actually think that this book lends itself well to audio, because of it's chaotic makeup.  I was able to easily pick up where I had left off and not try to figure out if I missed something!
I would suggest only listening to this where no children are around, because the language can be quite descriptive.  I probably would have enjoyed the book more, if there was less cussing, but I know she wrote it how she lives it!  If you enjoy memoirs and learning how a disturbed mind ticks and want a little more insight into the celebrity world...you should pick this up.

About the author:
Carrie Fisher, the daughter of Debbie Reynolds and Eddie Fisher, became an icon when she starred as Princess Leia in the original Star Wars trilogy. Her star-studded career includes roles in numerous films such as The Blues Brothers and When Harry Met Sally. She is the author of five bestselling novels, Wishful Drinking, Surrender the Pink, Delusions of Grandma, The Best Awful, andPostcards from the Edge, which was made into a hit film starring Shirley MacLaine and Meryl Streep. Fisher's experience with addiction and mental illness--and her willingness to speak honestly about them--have made her a sought-after speaker and respected advocate.
Posted by jacque at 9:45 AM