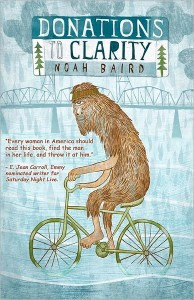 About the Book:
(from promo materials)
"The plan was simple: hoax bigfoot, then sell tours to bigfoot enthusiasts. The plan wasn’t brilliant, and neither were Harry, Earl, and Patch. The three chemical-abusing friends only wanted to avoid the 9 to 5 rat race, but their antics attract the attention of a real bigfoot. When the misogynistic Earl is mistaken for a female bigfoot by the nearsighted creature and captured; it is just the beginning of their problems.
The U.S. Government has a plan to naturalize the mythical creatures living within the U.S. borders.  The problem is the plan needs to be carried out carefully.  You can’t just drop little green men and Sasquatch in the middle of Walmart without warning Ma and Pa Taxpayer. The naturalization program is not ready to be set into motion, and the rogue bigfoot is bringing too much attention to itself, including a feisty investigative reporter who uncovers the truth of the government conspiracy and two bigfoot researchers. No longer able to contain the situation, government agents are tasked with eliminating the bigfoot and all witnesses.
Between bong hits and water balloon fights, Harry and Patch come up with a plan to save Earl and the lovestruck bigfoot. Where do you hide a giant, mythical creature? In an insane asylum, because who is going to listen to them?
Along the way, the three friends learn Star Wars was a government training film for children, the truth behind Elvis meeting President Nixon, and the significance of the weight of the human turd."
My take:
I had been reading a lot of fantasy or romance stuff lately and needed a break from the 'serious' stuff and try and get a laugh in.  Guess what?  I laughed so hard I thought I would pee my pants when I opened up this book..but lucky enough for me, my day job consists of being surrounded by adult diapers and I seriously thought about borrowing enough just in case I would need them before the end of the book.  From the strategically placed musical quotes to the misguided attempts of Elvis impersonating, to the whole Big Foot tour, Donation was one laugh followed by another.  Now...I have a very strange sense of humor...I find the absurd things amusing so if your sense of humor is more normal, you may find yourself struggling to find the humor behind some of the story line.  Some would say that this is more of a male type book, but I thought it was pretty darn amusing.  There is some language and potty talk, which is why I gave it an R rating.   If you are finding yourself looking around for a good guffaw...I would buy a copy of this book and take it for a spin!  Also, go to Pump Up Your Book site and follow Mr. Baird around on his tour and read some of the things that spew out of his mouth in the form of interviews and guest blogs!  Quite amusing!
About the author:
{sometimes I use the official bio and sometimes I find what I like about an author but this time...I had to go w/ the official!}
Noah Baird wanted to attend the Ringling Bros. and Barnum & Bailey Clown College, but his grades weren’t good enough (who knew?).  However, his grades were good enough to fly for the U.S. Navy (again, who knew?), where he spent 14 years until the government figured out surfers don’t make the best military aviators. He has also tried to be a stand-up comedian in Hawaii for Japanese tourists where the language barrier really screwed up some great jokes. On the bright side, a sailboat was named after the punchline of one of his jokes.
He has several political satire pieces published on The Spoof under the pen name orioncrew.  Noah received his bachelors in Historical and Political Sciences from Chaminade University, where he graduated magna cum laude. He knows nothing about hoaxing Bigfoot.Donations to Clarity is his first novel.
You can visit his website at www.noahbaird.com or his blog at www.noahbaird.wordpress.com.  He's not on Twitter....trust me I checked and if you do find him...PLEASE let me know!
Connect with him at Facebook at http://www.facebook.com/pages/Noah-Baird-Writer/100193913390453.