THE BROZNE AND BRIMSTONE {review} 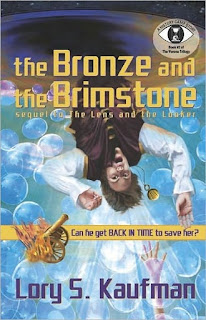 
What could go wrong in the 14th-century for three time-traveling teens?   How about – EVERYTHING!
Hansum, Shamira and Lincoln, three teens from the 24th century, are trapped in 14th-century Verona, Italy. They’ve survived many deadly experiences by keeping their wits about them and by introducing futuristic technology into the past. Principal among these inventions is the telescope, which brought them to the attention of the rich and powerful.
But standing out can get you into unexpected and dangerous situations. The nobles of Verona now believe Hansum is a savant, a genius inventor, especially after he brings them plans for advanced cannons and black powder. Being the center of attention is great, but the potential for trouble is now exponentially greater because people are watching Hansum’s every move.
Meanwhile, artistic genius Shamira has fallen for a Florentine artist with bloody and disastrous consequences. Lincoln, considered an incompetent back home in the 24th-century, has blossomed – at least until he’s shot in the head with an arrow. And Hansum, after secretly marrying his new master’s beautiful daughter, Guilietta, is offered the hand in marriage of lady Beatrice, daughter of the ruler of Verona. To refuse could mean calamity for all the teens.
Amazingly, none of this is their biggest challenge. Because a rash illness is spreading across Verona – and it is threatening to consume everyone.
Do they have a future in this past?

MY TAKE:
This is book 2 in the History Camp book series from Lory Kaufman and as much as I liked Book 1 (The Lens and the Looker), I liked Book 2 even more.  The characters were more developed and I could really see the struggles as they 'grew up'.  And the history lessons just kept on coming and I really learned allot about the making of black powder and just the learning of the day to day activities in Verona.  Again there was some violence and language..(thus the pg13 rating), but a very worthy companion to some of the other popular dystopian's out there, just set in the past instead of the future.  This story dealt more with Hansum and I hope Book 3 tells us more of the Shamira and Lincoln characters....although there are certain things I need to find out about Hansum!  While you could probably read book 2 without having read book 1, there is quite a bit of back story in the beginning, I think it's probably beneficial to read to read them in order.


Recommendation...Perfect for those who like history and those that are looking for more than just your average the world has ended dystopian!
ABOUT THE AUTHOR: 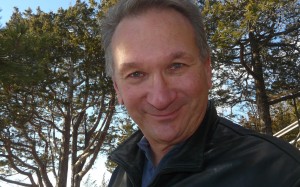 “I write Post-Dystopian fiction. After society’s collapse, which is imagined in so many great dystopian stories, humans will either fade into history, with the dinosaurs, or, if it learns the right lessons, society will go on to construct a civilization to last tens of thousands of years. History Camp stories are the exciting adventures of young people doing the latter.” -Lory KaufmanOn the artistic side of Lory’s career, he’s written, acted and directed children’s theatre and musical theatre. He enjoys art, especially sculpture. He loves science fiction and historical fiction and he has been deeply involved in the green movement all across North America. All this shows through when you read his work. Lory has three grown children and works and lives in Kingston, Canada.
To find out more about Lory visit www.history-camp.com


I was given a copy of this book for an honest review.. no other compensation was given.
Posted by jacque at 12:00 AM