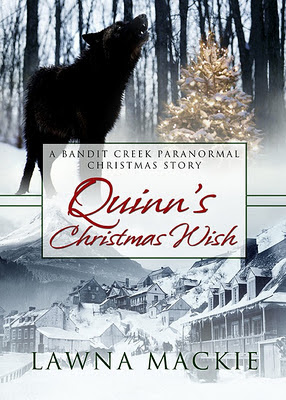 I really enjoyed hearing from Lawna and hearing why Christmas is her favorite time of the year! I hope you do too!

I always wanted to write a Christmas story so when the opportunity arose I jumped at it. QUINN’S CHRISTMAS WISH tugged on my heartstrings. Hopefully it will have the same effect on you.
Before I wrote this novella I’d never written anything historical, and certainly never anything containing both historical and paranormal. I love reading paranormal Christmas stories. I think it’s the perfect recipe.
The wolf in my story has personal meaning for me. In my lifetime I’ve had the pleasure of knowing a wolf personally. That wolf was named Scram. I also knew a Lopa, and the third one didn’t have a name but was a beautiful sweet female who took a liking to me.
I can’t bear the thought of any animal dying, which is why I love paranormal stories. Nothing ever has to die if I don’t want them to. And of course, I never want them to. Even if they do die, they don’t have to stay dead. (Now I’m saying too much!)
I also have these wonderful Alaskan Malamutes in my life. My first malamute was named Bear and he died at age eleven. My second malamute was named Bandit, and he died at a young age of four and a half. He had epilepsy and died of a massive seizure. This was another reason why I wrote about the wolf in my store. People will just have to read QUINN’S CHRISTMAS WISH to understand exactly what I mean.
It’s my intent to have a sequel to this story where Quinn and Jazira have grown up. I actually can’t wait to write it. I hope people l have a chance to read it and leave me a note about writing the sequel.
It’s a great Christmas read! Curl up by a fire with a cup of hot chocolate or tea and enjoy.

About the Book:
As far as twelve-year old Quinn is concerned Christmas has lost its magic. Since his father’s death life has lost its sparkle. His mom is now a widow struggling to put food on the table. Quinn is no help, and the mysterious illness afflicting him only makes things worse. Even Christmas, complete with decorated trees, ribbons and bows has no meaning…then along comes Jazira.

Christmas Eve finds Quinn staring up at the adorned tree and muttering a quiet prayer. Will the Spirits of Christmas grant his wish, or will the evil surrounding Bandit Creek prevail once again?

My Take:
It's a sweet paranormal Christmas story!  I don't usually like shapeshifter books, but this was a good story.  A little too short..but now that I know she's planning on a sequel I feel a little better..lol  There is a little bit of everything in this book, despair, hopelessness, love, mystery and the paranormal aspect!  Wow..for such a short book she really crammed it in there but did it quite well.  There is a sex scene, not graphic enough to say it's erotica...but enough for me to say adults only please.  If you are in the mood for something a bit off the wall for this Christmas season (meaning historical paranormal romance)...you should check it out.

About the Author:
I have always believed in fairy tales and when I got tired of the old ones I would make up my own. Each story would have a hero and heroine, but they were anything but ttypical.

I devoured my first romance novel when I was a teenager. I couldn’t read them fast enough. Years later I stumbled across my first paranormal romance…an injustice would be done if I tried to explain my joy
when I found this genre of romance. My passion was finally in print.


Now, with the help of my bizarre dreams and crazy imagination, I have started to write and intend to share my stories with you. I hope you’ll love them as much as I do.


I am truly blessed. My husband and my animals are my inspiration. We live on a small acreage in Didsbury, Alberta, with our most beloved companions, Dozer, Daisy and Mandarin.


Happy reading everyone, I sure would love to hear from you.
www.lawnamackie.ca


ENCHANTMENT – January 13, 2012 released through Muse It Up Publishing
http://museituppublishing.com