Available:  Now
Source:  author via Pump Up Your Books

I'd like to thank Benjamin Kane Etheridge here today to tell us about his top 25 books we should read...
My TBR Mountain totally toppled and I hope yours will too!

25 THRILLING TALES YOU MIGHT NOT HAVE READ, BUT SHOULD!

Forget everything you know about Halloween. The stories are distortions. They were created to keep the Church of Midnight hidden from the world. Every October 31st a gateway opens to a hostile land of sacrificial magic and chaos. Since the beginning of civilization the Church of Midnight has attempted to open the gateway and unite with its other half, the Church of Morning. Each year they’ve come closer, waiting for the ideal sacrifice to open the gateway permanently. This year that sacrifice has come. And only two can protect it.Martin and Teresa are the nomads, battle-hardened people who lack identity and are forever road-bound on an endless mission to guard the sacrifice. Their only direction is from notes left from a mysterious person called the Messenger. Endowed with a strange telekinetic power, the nomads will use everything at their disposal to make it through the night alive.But matters have become even more complicated this year. Teresa has quickly lost ground battling cancer, while Martin has spiraled into a panic over being left alone. His mind may no longer be on the fight when it matters most… because ever on their heels is the insidious physical representation of a united church: Chaplain Cloth.

My Take:
Horror is not my genre of choice, but I do like a good scare now and then.  When I decided to review this book, I wasn't sure what to expect.  The reviews that I read seemed to rave about the book, so I took a chance.  I was not disappointed.  Mr. Ethridge can take some words, move them around in these things called sentences and deliver a punch!  The horror story aspect aside, his writing is just delightful to read...  I loved the way he could put 2 and 2 together and come up with 7 and it made sense!  The story itself was well..it was horror fantasy, so I can't say it was great...it was horrifying to read...yet I couldn't put it down!  I really enjoyed it...and I can't wait for the next one...there is a next one RIGHT?

My Recommendation?   Buy it and read it...especially for those that enjoy the genre.  Remember it is a dark read...so mature audiences? 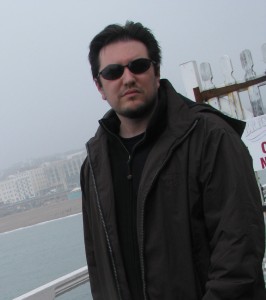 About the Author:
Benjamin Kane Ethridge is the Bram Stoker Award winning author of the novel BLACK & ORANGE (Bad Moon Books 2010). Beyond that he's written several collaborations with Michael Louis Calvillo, one of which is a novella called UGLY SPIRIT, available in 2011. He also wrote a master's thesis entitled, "CAUSES OF UNEASE: The Rhetoric of Horror Fiction and Film." Available in an ivory tower near you. Benjamin lives in Southern California with his wife and two creatures who possess stunning resemblances to human children. When he isn't writing, reading, videogaming, Benjamin's defending California's waterways and sewers from pollution. Say hi and drop a line at ben@bkethridge.com or tweet him at @bkethridge, or facebook him at www.facebook.com/benjamin.kane.ethridge