Let me start by telling you about the giveaway from the publisher!
$50 Amazon.com giveaway to blog readers!
All you have to do is tweet (using @litfuse) about the Mirror of N'de
Or Share it on Facebook!

Don't know what to tweet?
TWEET THIS: New YA fantasy – The Mirror of N’de – compelling narrative and creative characters! @litfuse RT for $50 to @amazon http://ow.ly/7AWGT
OR
FACEBOOK THIS: Don’t miss this debut YA fantasy story: Crafting powerful narrative and creative characters, author L. K. Malone spins a compelling tale that combines exciting entertainment and the Christian story. In The Mirror of N’de, readers will empathize with the desires of an oppressed people, will anger at the affliction of a cruel adversary, and ultimately rejoice with the revelation of a Savior. Share this for a chance at $50 to Amazon.com http://litfusegroup.com/blogtours/text/13440685 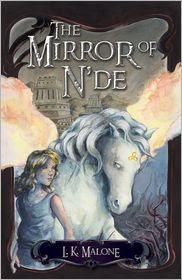 In the mythical city of N’de lives thirteen-year-old Hadlay and her people, the Ramash. Scorned and abused by the unloving and absent Emperor, the Ramash are poor people, placed second to the ruling class of the Oresed. Young but bold, Hadlay rages against the injustice in her city. When she is chosen for the honor of serving the Prince in the Tower, she hopes to find a way to right the wrong... but soon discovers that things are worse than she believed.

While Hadlay works to better her people’s condition, she struggles to abide with the abusive Oresed and understand the meaning of her dreams in which a fantastical white horse appears to her and speaks in riddles. When Hadlay stumbles into one of the Tower’s secret rooms, she discovers a hidden mirror that doesn’t just show her reflection, but reveals much more: the horse’s name is Sirach and he has a plan to save the children of N’de, if only Hadlay can bring them to the mirror. Hiding her knowledge of Sirach from the Prince, Hadlay sets out to do Sirach’s bidding. But when Sirach’s presence is revealed, Hadley’s life is in danger and the only way to save her is for Sirach to give up his own.

Crafting powerful narrative and creative characters, author L. K. Malone spins a compelling tale that combines exciting entertainment and the Christian story. In The Mirror of N’de, readers will empathize with the desires of an oppressed people, will anger at the affliction of a cruel adversary, and ultimately rejoice with the revelation of a Savior.

My Take:
It takes a special writer to weave a story of fantasy and let it hint at a Higher Power.  Think Chronicles of Narnia by C.S. Lewis, etc.  Well, L.K., may have just found her niche in the Christian fantasy genre.  There are so many lessons to be learned in the reading of this book that I would recommend this for all ages, not just the YA...however, parents, I urge you to read this with those under 13 to make sure they are getting all they can out of the book and understand what is happening.  The story flows very quickly...very much a plot driven book!  I had to keep turning the page to find out what was happening.  And I found myself chuckling at the many puns sprinkled throughout the book!   And then I had to stop and digest what I read...it is a book that will stay with you for a few days.  Very good debut and I hope to keep hearing more from L.K. Malone!  If fantasy is your genre of choice and are looking for something a little more out of fantasy than the vampire or werewolf, pick this up and add it to your library today.


Don't take my word for it though...Read what others think here!

My recommendation:  Buy it Now!


About the Author:
L. K. Malone is an insatiable reader who devours nearly a book a day when she isn’t writing. Favorite genres include political thrillers, historical fiction, romance, and fantasy. Some of her favorite reads include the Hunger Games series and the Harry Potter books, which inspired her to try her hand at fantasy with a Judeo-Christian twist. Malone is a Colorado native with a large extended family, which includes two lovely young women who graciously let her mentor them through the Denver Kids program, and a handsome menagerie of pets.


I was given a copy of this book by someone in return for a review.  I was not required to give a pleasant review, just my honest reactions!
Posted by jacque at 3:00 AM