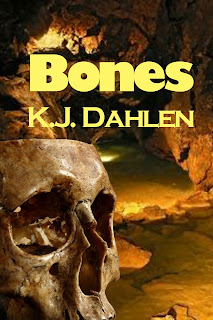 A BIG THANK YOU TO K.J. FOR JOINING ME HERE TODAY TO TELL US HOW SHE GETS  HER INSPIRATION FOR HER BOOKS!   I HOPE THIS HELPS ALL THOSE AUTHORS WHO ARE BUSY WRITING THEIR DEBUT BOOKS NOW!


I love to take a thought or phrase and turn it into a book. One of my books, The Prophet, was written from a phrase, “Has he asked you to convert yet?”
I make up my characters from the people that I know. I take certain traits or looks and give them to the heroes and heroines in my books. I also try and put a little bit of myself in my books. We are all different for a reason and I like that.
Bones is a search in a small town for a serial killer. Someone had been murdering women yet no one has noticed him for years. Then two young boys stumble upon his dumping grounds and notify the police. Max Reardon has to find out who the women were and why they were killed.
I used a small town setting because I live in a small town and the hillside where the cave is found could be hidden on the bluffs where I live. Max is a man who has seen the best and the worst in people and he chooses to deal with the best, although now he has to deal with the worst.
I’ve used what I’ve read in books and seen on tv and just plain common sense to research this book and all my books. I like to watch people and what they talk about or react to tells me how they think and how they will act in certain situations. I use the bits and pieces I’ve collected in my books and add twists and turns to make the story more interesting. They call it fiction for a reason. Most of my books are pure imagination.
Sometimes I think I know where the story will go but just when I think that it takes off in a whole other direction.  I once saw an old man sitting alone in a bar sipping on a beer. He was the perfect looking bad guy I had ever seen. In my mind he became a serial killer for a book I built around his appearance. I know the guy was probably the most gentle man I could know but in my mind he was a killer in a book yet to be written. He became my River Man.
I’ve been asked many ,many times how I come up with a plot to yet another story but there is no one answer to that question.  It can be a phrase, or seeing someone I think would be a good character in a book,  or a dream I had. It can be just about anything  that pops into my head then suddenly a get an idea for a book.  When I get an idea I have to sit down and write out an outline. The outline is just an outline, sometimes I stay with it and sometimes I don’t. The book usually plays out in my head like a movie, but that is what  works for me.

About the Book:
When human bones are discovered in a cave just outside of town, it’s up to Sheriff Max Reardon to find out who the bones belonged to. But someone in town doesn’t want the bones identified and they go to great lengths to try and stop Max’s investigation.
They break into Max’s house and try and destroy the evidence and when that doesn’t work they frame Max for murder. Can Max clear his name and bring the murderer or murderers to justice?

My Take:
What a great quick read for mystery fans of all!  It's quick to take off and keeps the suspense going from there on.  It was simply written and while it didn't take a lot of thought to follow the story, the puzzle was fun to try and solve before the end!  Highly recommend and I'm off to read more from this author!

About the Author:
Kim lives in a small town (population495) in Wisconsin. From her deck she can see the Mississippi River on one side and the bluffs, where eagles live and nest on the other side. She lives with her husband Dave and dog Sammy. Her two children are grown and two grandchildren and for that fact she feels blessed. She loves to watch people and that has helped her with her writing. She loves to create characters and put them in a troubling situation and just sit back and let them do all the work. They surprise even her at times. They take on a life of their own and the twists and turns become a story. She found she liked mystery/thrillers the best. She likes to keep her readers guessing until the very end of the book.

The Giveaway
K.J. will be giving away a $10 Amazon gift certificate, plus the chance to help her with her new book--the winner will get to write a short blurb and K.J. will write the book based on it, so click the banner and follow the stops for your chance to win!  The more you comment the better your chance of winning!
Posted by jacque at 12:00 AM