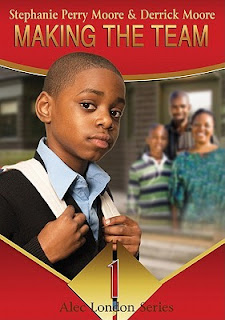 
INTRODUCING THE ALEC LONDON SERIES
The Alec London Series is a series written for boys, 8 – 12 years old. Alec London is introduced in Stephanie Perry Moore’s previously released series, The Morgan Love Series. In this new series, readers get a glimpse of Alec’s life up close and personal. The series provides moral lessons that will aid in character development, teaching boys how to effectively deal with the various issues they face at this stage of life. The series will also help boys develop their English and math skills as they read through the stories and complete the entertaining and educational exercises provided at the end of each chapter and in the back of the book.


About the Book: Making the Team
Alec London is a fourth grader whose have a tough time. His dad is the new assistant principal at school; his classmate Tyrod is bullying him; his brother, Antoine is mad with him and his mom is going away for a long period of time because of her job. Through the game of football, lessons from his dad and a story about a man named Joseph, Alec learns that God cares about him and will help him out when he is struggling.

My Take:
Finally, a book for boys that will also entertain girls, but more importantly deals with personal struggles (instead of trying to defeat the vampire or something).  Not only is the moral issue easily identified but the other extra exercises (fun) that will hopefully keep them into the book.  The book I read in the series teaches that God does care and can help.  I really enjoyed it, probably more in the range of 8-10 year olds, can be a bit simple for older, but they may enjoy the story anyway.  Great series...can't wait to see what else Alec gets into!


STEPHANIE PERRY MOORE is the author of many Young Adult Christian fiction titles, including the Payton Skky series, the Laurel Shadrach series, the Perry Skky Jr. series, the Faith Thomas Novelzine series, the Carmen Browne series, and the Beta Gamma Pi series. She is also the co-editor for the impactful BibleZine, REAL. Mrs. Moore speaks with young people across the country, showing them how they can live life fully and do it God’s way. Stephanie currently lives in the greater Atlanta area with her husband, Derrick, a former NFL player and author, and their three children. Visit her website at www.stephanieperrymoore.com.

DERRICK MOORE is a former NFL athlete who played for the Detroit Lions, Carolina Panthers, and Arizona Cardinals following his successful college football career. Since his retirement from the NFL in 1998 he has been in demand as a motivational speaker for professional teams, civic groups, churches, and the Fellowship of Christian Athletes. He is on staff with FCA, serving as the chaplain of the football program at Georgia Tech. Derrick is the author of The Great Adventure and the general editor for the Strength and Honor Bible.


For More Information, Visit the author online at:
http://www.stephanieperrymoore.com

View the blog tour schedule at:
http://www.tywebbinvirtualevents.com
Posted by jacque at 12:00 AM