I was lucky enough to be chosen to host Patti for a guest post spot on my blog and I tell you I couldn't be happier!!!  I love learning about other countries through books and knowing that Patti goes way beyond researching the background for her books I'm really excited to learn more about China and the Cultural Revolution.  So...Patti is here to tell you exactly.....


What is the Chinese Cultural Revolution?
By Patti Lacy
Wow! I am getting the history and sociocultural questions galore! This actually has been fun—thanks!!! 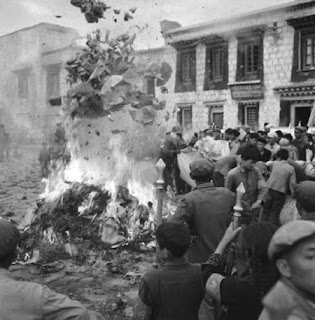 What’s the Cultural Revolution? It’s a blazing bonfire of books and musical instruments and “useless” things. It’s destroying even a pretty flower for having bourgeois tendencies. It’s being imprisoned, beaten, denounced for desiring education, all in the name of a return to peasant values. It’s birds, being slaughtered for eating precious grain during drought times, which led to a population explosion in beetles, which gobbled more grain. Such poignant memoirs as Wild Swans and Oracle Bones provided examples that made my skin crawl. Ask most Chinese who endured this time period, and they’ll say the Cultural Revolution was hell on earth.

Scholars identify the decade from 1966 to 1976 as the time when Mao Zedong, leader of China’s newly victorious Communist Party, "purified" China and encouraged his Red Guards to attack traditional and "bourgeois" values and test party officials by publicly criticizing them. Many elderly people and intellectuals were verbally attacked, physically abused, and some were killed.

During this insidious time, only Mao could be worshipped. Buddhists and Christians alike suffered for their faith. Many were sent to the countryside "to receive re-education from poor farmers and peasants" and were forced to do heavy manual labor, fueled only by a few grains of rice and thin porridge.
So why did I choose to include stories about the Cultural Revolution in Reclaiming Lily? In a way only God could’ve ordained, my mom’s cancer doctor found out I was a writer and agreed to talk to me on Sunday, the only time she wasn’t seeing patients and studying charts. In a soft voice, Dr. Chang described how, during the Cultural Revolution, her educated father and mother were dragged from their home and imprisoned in the basement of the local school that Dr. Chang and her sisters attended. At recess, the prisoners would be led to an area where Dr. Chang and her classmates would play. Students hurled rocks and sticks and shouted denunciations at the “class criminals,” who often had only wanted a better life for their family. Imagine, being abused for owning a book or a vase! Dr. Chang began to cry as she shared how she, too, joined in the horrid activity. 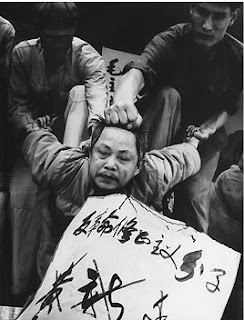 For several years, the three Chang sisters battled starvation and the taunts of neighbors. Schools closed, and the Chang girls boarded up their windows, fearful that soldiers would break in and rape or beat them. Then their parents limped home from jail, bringing their pains and terrors with them. For the Chang sisters, the nightmare had only begun…
Though Reclaiming Lily is not set during the Cultural Revolution era, through flashbacks, I time travel to share what DID happen to the Changs.

Okay. You wanna know how it turned out, huh? You didn’t think I was gonna tell you the whole story, did you???


About the BookA storm the size of Texas brews when Gloria Powell and Kai Chang meet in a Dallas hotel. They have come to discuss the future of Lily, the daughter Gloria adopted from China and the sister Kai hopes to reclaim. Kai is a doctor who had to give up her little sister during the Cultural Revolution and has since discovered that an inherited genetic defect may be waiting to fatally strike Lily.Gloria's relationship with her daughter is tattered and strained, and the arrival of Kai, despite the woman's apparent good intentions, makes Gloria fearful. Gloria longs to restore her relationship with Lily, but in the wake of this potentially devastating diagnosis, is Kai an answer to prayer...or will her arrival force Gloria to sacrifice more than she ever imagined?

About the AuthorPatti Lacy graduated from Baylor University in 1977 with a BS in education. She taught at Heartland Community College in Normal, Illinois, until she retired in 2006 to pursue writing full time. She and her husband, Alan, have two grown children. Visit Patti at http://www.pattilacy.com.
VISIT THE FULL BLOG TOUR SCHEDULE AT http://bit.ly/ReclaimingLilyVirtualBookTour.
I don't know how I ended up being able to learn so much more about this book with this tour, but I'm so excited to post more about it!  The history of China is a definite eye opener for this Midwesterner (central IL isn't exactly the hotbed of action!) This book had me hooked from page one.  Knowing several families and their journey to the foreign lands to adopt children and their struggle before, during and after this book fed into my heart more deeply than other historical fiction books.  This book is definitely on the heavy side of reading and learning and caring and well..you get the point!  If you are prone to be emotional during reads...then I'd suggest a tissue or two at hand!  Having read her earlier works, I'd have to say this is even a stronger voice than Rhythms of Secrets and while the writing style is the same, there is definite growth as a writer and I can't wait to read the next book!  I really liked the fact that we learned the story in bits and pieces because as tragic as the story was, I'm not sure I could have handled it all at once.  I will warn you that if you question the whys to life, this book will surely make you do that. Not only this story, but the real life stories of so many who have adopted or lived during this time in China's not so distant history.  Okay..because I want you to read this one..I'll stop and urge you to go out and get it!
Posted by jacque at 3:00 AM