It is time for a FIRST Wild Card Tour book review! If you wish to join the FIRST blog alliance, just click the button. We are a group of reviewers who tour Christian books. A Wild Card post includes a brief bio of the author and a full chapter from each book toured. The reason it is called a FIRST Wild Card Tour is that you never know if the book will be fiction, non~fiction, for young, or for old...or for somewhere in between! Enjoy your free peek into the book!


You never know when I might play a wild card on you!

***Special thanks to Jon Wooten of Charisma House for sending me a review copy.*** 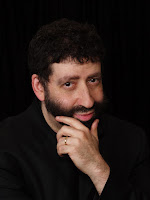 Jonathan Cahn leads Hope of the World ministries and the Jerusalem Center/Beth Israel, a worship center made up of Jew and Gentile, people of all backgrounds, located in Wayne, New Jersey. His teachings are seen on television and radio throughout the nation and are known for their prophetic significance and their revealing of deep mysteries of God’s Word.

That there exists an ancient mystery that holds the secret of America’s future?

That this mystery lies behind everything from 9/11 to the collapse of the global economy?

That ancient harbingers of judgment are now manifesting in America?

That God is sending America a prophetic message of what is yet to come?

Before its destruction as a nation, ancient Israel received nine harbingers, prophetic omens of warning. The same nine harbingers are now manifesting in America—with immediate ramifications for end-time prophecy.

Hidden in an ancient biblical prophecy from Isaiah, the mysteries revealed in The Harbinger are so precise that they foretold recent American events down to the exact days. The revelations are so specific that even the most hardened skeptics will find it hard to dismiss or put down. It sounds like the plot of a Hollywood thriller – with one exception… IT’S REAL.

The prophetic mysteries are revealed through an intriguing and engaging narrative the reader will find hard to put down. The Harbinger opens with the appearance of a man burdened with a message he has received from a mysterious figure called The Prophet. The Prophet has given him nine seals, each containing a message about America’s future. As he tells of his encounters with The Prophet, from a skyscraper in New York City, to a rural mountaintop, to Capitol Hill, to Ground Zero, the mystery behind each seal is revealed. As the story unfolds, each revelation becomes a piece in a greater puzzle – the ramifications of which will even alter the course of world history.

An ancient mystery that holds the secret of America’s future.”

“What would I think?”

“Yes, what would you think?”

“I’d think it was a plot for a movie. Is that it? Is that what you’re presenting . . . a movie manuscript?”

“Then what?” she repeated.

He paused to carefully consider what he was about to say and how to say it. Her reputation among those in media was that of a woman who neither wasted her time nor indulged those who

did. She was not known to suffer fools gladly. The discussion could meet an abrupt end at any given moment and there would be no second chance with her. The fact that there had even been a

meeting in the first place, that she had even agreed to it, and that he was now sitting in her office, high above the streets of Manhattan, was nothing short of a miracle—and he knew it. He had only one concern—the message. It didn’t even occur to him to remove his black leather overcoat, nor had anyone offered to remove it for him. Leaning forward in his chair, he gave her his answer, slowly, cautiously, carefully deliberating every word.

“An ancient mystery . . . that holds the secret of America’s future . . . and on which its future hangs. And it’s not fiction—it’s real.”

She was quiet. At first, he took the silence as a positive sign, an indication that he was getting through. But then she spoke and quickly dispelled the notion.

“An Indiana Jones movie,” she said. “An ancient mystery hidden for thousands of years under the sands of the Middle East . . . but now revealed . . . and upon it hangs the fate of the entire world!”

Her flippancy provoked him to become all the more resolute.

“What would I say?” she asked.

“If you’re not crazy, then you’re joking . . . or you’re doing this all for dramatic effect . . . part of a presentation. But you can’t be serious.”

She paused for a moment, staring into the eyes of her guest, attempting to ascertain whether he was sincere or not.

It was then that her expression changed. Up to that point it had suggested a trace of amused interest. It now turned to that of total disengagement.

“That’s Goren. The accent’s on the last syllable. But Ana is fine.”

“Ana, you have nothing to lose by listening. Just go on the slight possibility . . . ”

“That you’re not crazy?”

of possibilities . . . for just that . . . it would be important enough to warrant your time. You need to hear me out.”

She sat back in her chair and stared at him, making no attempt to hide her skepticism.

“For argument’s sake, let’s say you’re right. I am crazy. Indulge me, as a public service.”

“Nouriel. You can call me Nouriel.”

At that, she got up from her chair and motioned for him to do likewise. She led him away from her desk to a small round conference table where the two sat down. The table was situated in

front of a huge glass window through which one could see a vast panorama of skyscrapers with similar windows, each reflecting the light of the afternoon sun.

“All right, Nouriel. Tell me about your mystery.”

“It’s not my mystery. It’s much bigger than me. You have no idea how big, or what it involves.”

“And what does it involve?”

“How could an ancient mystery possibly have anything to do with September 11?”

“An ancient mystery behind everything from 9/11 to the economy . . . to the housing boom . . . to the war in Iraq . . . to the collapse of Wall Street. Everything in precise detail.”

“Affect your life? Your bank account? Your future? But it does. And it holds the key to America’s future . . . to the rise and fall of nations . . . to world history. And it’s not only a mystery, it’s a message, an alarm.”

“Two and a half thousand years.”

“A two-and-a-half-thousand-year-old mystery behind what’s happening in the twenty-first century from politics to the economy to foreign affairs—all that and you’re the only one who knows about it?”

“Who else knows about it?” she asked.

“There’s at least one other.”

“As far as I know, no government, no intelligence agency, no one else.”

“And at least one other.”

“And how did you happen to discover it?”

At this she leaned forward and spoke to him in a tone both intense and slightly sarcastic.

“What was his name?”

“You don’t know?” she replied, with a trace of amusement in her voice.

“So this earth-shattering mystery is known only by you and this one man who gave it to you but doesn’t have a name.”

“And you never asked?”

“I don’t expect you to believe me yet.”

“Why not?” she replied, making no attempt to hide her skepticism.

“It sounds so plausible!”

“So this man with no name gives you this mystery.”

“I guess I was the right one.”

“So you were chosen?”

“I guess so,” he replied, his voice trailing off.

“And where did he get the mystery from?”

“A mystery on which the nation’s future is hanging, and no one knows where it came from?”

“From where do prophets get their messages?”

“The last time I heard about prophets I was in Sunday school, Nouriel. Prophets don’t exist anymore. They’ve been gone for ages.”

“So you’re telling me that the man who gave you this revelation is a prophet?”

“He told you he was a prophet?”

“And you believe all this because it came from a prophet?”

“So why are you telling me all this? Why did you come here? I’m not exactly known for dealing with anything remotely like this.”

“Because the stakes are so high. Because the future is hanging on it. Because it affects millions of people.”

“And you think I have a part in this?”

She leaned back in her chair and stared at him for a moment, intrigued, amused, and still trying to figure him out.

“So, Nouriel, tell me how it all began.”

He reached into his coat pocket, laid his closed hand down on the table, then opened it. In the middle of his palm was a small object of reddish, golden-brown clay, circular and about two inches in diameter.

“It all began with this.”

He handed it to her. She began examining it. The more she looked at it, the more intrigued she became. It was covered with what appeared to be ancient inscriptions.

“It all began with this.”