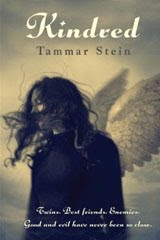 Miriam and Moses, twins who find themselves on opposite ends of the spiritual spectrum as each are visited by the divine. Miriam finds herself visited by the angel of God and Mo says he was visited by the Devil himself. When Miriam starts coming down with a strange stomach ailment even after getting her first mission partially accomplished, she isn't sure it's God's will that she is following. Miriam says she isn't really religious, but throughout the book you can watch her struggle with her beliefs and those around her.

At the heart of the book is the age old struggle of most college bound people, is God real and is He good or bad. Along the trip, Miriam finds herself in the company of different beliefs that help her come to terms with her beliefs. When I first decided to read this book, I wasn't sure what to expect. A lot of the YA angel books deal with falling in love with an angelic being, but this book was less of the angels as I was led to believe by the promo and more on the struggle. A word of warning for those who are queasy over body functions, there are a lot of bowel problems mentioned in this book, even complete with a colonoscopy! I did like this book, it can definitely start a dialogue between a teen and their parents. Her parents are Jewish and Catholic so there is a bit of both theologies in the book, but it does not distract from Miriam's story, only adds to it.

I'd definitely say this book is for older teens. There are a lot of tough issues in this book for a younger teen to take on. While nothing big is resolved in this book (sequel?) it can lead to a lot of soul searching.

This book was given to me to review by Star Book Tours, and no compensation was given for my honest review.
Posted by jacque at 5:08 PM